Some History About Us... 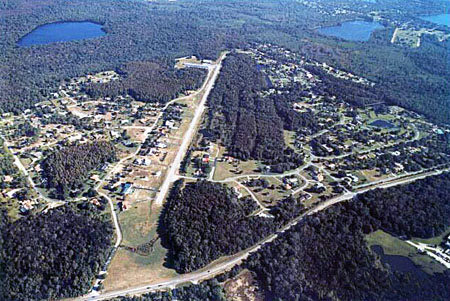 Hidden Lake Airport and its residential area, Hidden Lake Estates, were developed in 1970 on 400 acres of land in what was then a very rural area of New Port Richey Florida. The property was originally part of an adjacent ranch and was named for nearby Hidden Lake.

The developer built a 3400 foot lighted and paved airstrip, with hangars at the northeast end. The streets of the project, which the developer named after aircraft, were built on both sides of the airstrip. The property along the streets was divided into 131 one-acre parcels on which many beautiful and luxurious homes were built. The remaining property was to be a golf course.

In 1973 clearing for the golf course began but due to a number of problems, work was stopped and was never resumed.

In mid 1976, the developer began talking about selling the airport and remaining unsold property. Some of the residents, who were aviation oriented, feared that whoever purchased the property might change the airport's private status or eliminate the airstrip altogether, met to discuss the feasibility of purchasing the property. The first meeting was inconclusive because the purchase price could not be met. At a subsequent meeting, one of the residents offered to purchase the land that had been set aside for a golf course provided he could develop it into residential lots.

The residents agreed and negotiations to purchase the property were begun. The property was purchased in April, 1979 and in June, a corporation, Airport Investors Inc, was formed with shares being issued to the twenty-one indivduals who underwrote the purchase. So was born Hidden Lake Airport as it exists today, a privately owned and operated airport by a corporation of  individual stockholders designed to serve those of the community whom had airplanes and wanted the freedom of their own airport.

The resident who purchased the golf course property built streets, divided the land into residential parcels and extended the north end of the airstrip to connect with the newly developed area. Later, he purchased additional acreage from the adjoining ranch, adding another 29 residential lots to the Community.

The entirety of the Hidden Lake Estates and Airport was then licensed as an airport community with the Florida D.O.T. All streets then officialy became taxiways and aircraft were deemed to have right-of-way.  Voila! a fully operational and functional airport community. Soooooo, if you happen to be driving into our community and come face to face with an airplane, just back up and pull into the nearest driveway and allow the airplane to pass.

Airport Investors did not stop there. Over the years the elected and changing Board of Directors built additional T hangars for rental space on the airport proper for people who did not live in the community and wanted a beautiful private place to keep their aircraft to be based at. Airport Investors Inc. now has 29 T hangars  and are considering more to be built. In the past few years the runway has been extended on both ends.and is now  4425 feet in length.

Since 9/11 the airport has instituted many security enhancements which include fencing the entire airport with code operated security gates. This included security gates to the residential part of the community. Hidden Lake airport is a virtual safe haven for it's user's and residents.

Unlike most other airport communities which are isolated from civilization, Hidden Lake Airport is located in a very desireable area. The area around Hidden Lake has grown up and surrounded the airport. All stores and shopping centers are just minutes away. The new Suncoast highway can put you into downtown Tampa in less than 30 minutes. The Pasco Hernando Community College is right across the street. Just a minute from "wheels up" puts you out over the coastline and the Gulf of Mexico with sandy beaches stretching to the south as far as you can see.

We love it here. It is probably the best airport community in all of Florida, maybe in the entire U.S.